Approaching two major and long-lived civilizations comparatively encourages a focus on their most enduring and basic orientations, divergent as they may be. Here are two contrasting images: 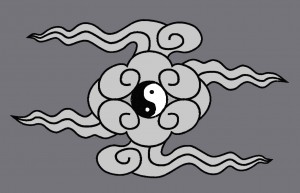 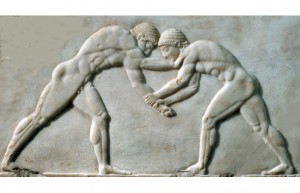 These two images are not obviously comparable because they are so radically different. That is part of the point. The Western image calls attention to a civilizational commitment deeper than democracy, or market economics, or even Judeo-Christian religion. That is agon, the Greek word for contest, a concept that underlies the workings of domains as diverse as the Olympic games, the Athenian assembly, and confrontations between thinkers such as Plato or Aristotle as a way of determining truth. The implicit commitment is that the winner determines what is “best”– until the next contest.

On the Chinese side, symmetry and balance dominate; harmony is presumed. But at the very center is represented neither a means of deciding contests nor even a stable reality. Instead we see there a taiji symbol that represents a dynamic alternating dominance between two principles, yin (dark) and yang (light). These are complementary opposites central to a totalizing system of correspondences that has served, for more than 2000 years, to situate everything likely to occur in the Chinese world. Each civilizational image serves to highlight central presumptions and to highlight differences in their appeals to credibility.