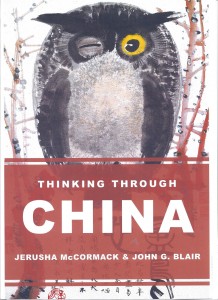 This book is one of a kind. While there are many other books about China, few take China on its own terms. Thinking through China seeks to do exactly that by isolating ten key concepts through which Chinese people habitually frame the world. This process enables comparisons with the way most of us, as Westerners, think about our own world.

This approach builds on scholarly sourcebooks published earlier by these same authors – plus a dozen years of back and forth between Western and Chinese universities. If an interested outsider learns only these ten words in Chinese, they are the ones that will count the most. Taken together they sustain a worldview, not at all Western, but in itself both coherent and comprehensive.

Once the reader is introduced to these ten key words, we then put them to work to respond to four questions Westerners keep asking about China: Why is it not Christian after centuries of missionary activity? What about human rights? Or Western-style Democracy? Does China aim to rule the world? While most books about China published today in English stick to Western categories, responding to such questions in Chinese terms yields some surprising results.

That shift in perspective presumes the validity of China’s own view of the world. Fostering such a non-judgmental enterprise is crucial if the West is to recognize that even such an alien world as China has its own coherence and compelling value. In the future now emerging, when we humans are all about to be overwhelmed by the growing climate crisis, such recognition – and with it, mutual respect – is crucial if the West and China – the world’s biggest polluters – can collaborate in unprecedented ways to take constructive action.

Buy Thinking Though China from Amazon.com